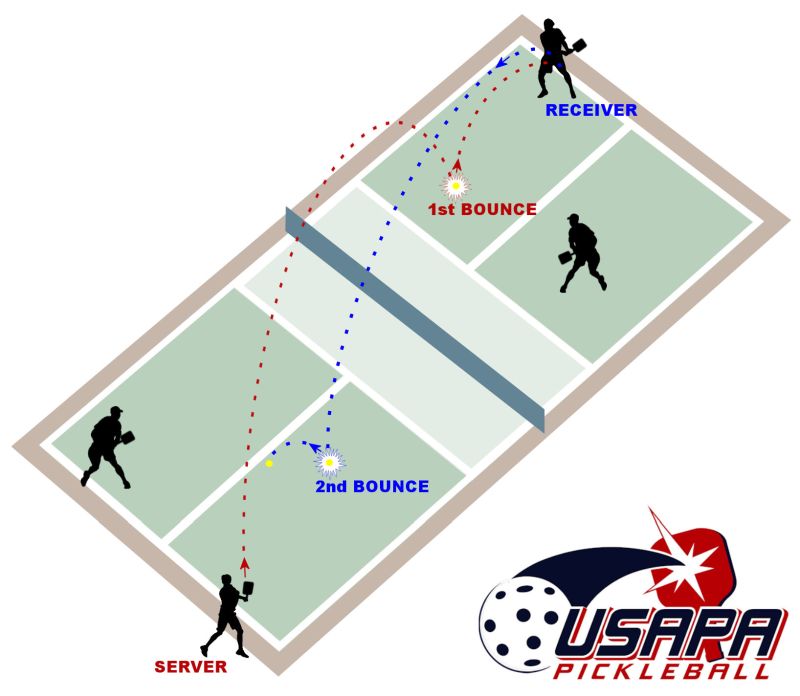 Created in 1965, pickleball began in Washington State in the backyard of Former U.S. Rep. Joel Pritchard. After a day of golf, Pritchard returned home in search of a more family-friendly game. With makeshift paddles in hand, he and a friend began batting around a perforated plastic ball. Rules were set and, after a few weeks, "pickleball" was born.

Pickleball is a sport that combines elements of tennis, badminton, and ping pong. The ball is served underhand starting from the right-hand side of the court and is served diagonally to the opponent's service zone. The service return must bounce first. Points are scored by the serving side only and occur when the opponent faults (fails to return the ball, hits the ball out of bounds or steps into the non-volley zone while in the act of volleying the ball). A player may enter the non-volley zone to play a ball that has bounced. The player must exit the non-volley zone before playing a volley. The return of service must be allowed to bounce by the server (and partner in doubles play); i.e. cannot be volleyed. Consequently, the server or server and partner usually stay at the baseline until the first return has been hit back and bounced once. The first side scoring eleven points and is leading by at least two points wins.

You may find the videos listed below helpful because they cover the basic pickleball fundamentals.

Court Lines - Ball in or out 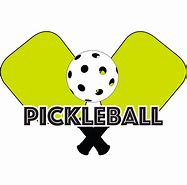 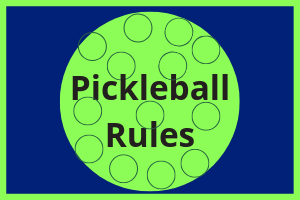 Service Lets – Prior to the recent changes, any serve touching the net and landing in the correct service area was considered a “Let” and a re-serve was conducted.  Service Let has been removed from the Rule Book and now a serve which touches the net and lands in the proper service court is considered in play.  A receiving team which calls a Let and stops play will have committed a fault.  It may take some time to get used to the change, therefore discretion should be used in allowing a re-serve when honest errors are made in fun play.

Serves – A Provisional Rule for a Drop Serve has been added (this Provisional Rule will be evaluated after a year to determine if it will remain as a rule).  There are now two types of serves – a normal serve and a drop serve.  Reasons for the change: 1. Provides a better server method for the physically impaired.  2.  Easier serve to teach beginners.  3.  Provides an alternate serve method for those who have the “yips” (lost serve).

Normal Serve – No changes to the rules.  Servers arm must be in an upward motion when the ball is struck, contact with the ball must not be made above the waist, and the highest point of the paddle head cannot be higher than the highest part of the wrist when it strikes the ball.

Drop Serve - The server must release the ball from one of the server’s hands or the paddle (visible to the receiver) from a natural height and hit the ball after it bounces on the playing surface at least once.  After the ball bounces the previously mentioned service rules in relation to the paddle position (for normal serve – see above) do not apply.  The ball cannot be thrown up or down as part of the drop.  In tournament play the server has 10 seconds to serve after the referee has called the score.  If the server is not happy with the first drop, they can pick it up and drop again as long as the serve occurs before the lapse of the 10 seconds.  If the server drops the ball for a drop serve and strikes the ball before it bounces, the rules for a normal serve apply.

Calling Score – Prior to the recent changes, the complete score had to be called before the service motion started.  The new rule states the complete score must be called before the ball is served.  This means the service motion can be started during the calling of the score, but the paddle cannot strike the ball until the call is completed.  Another rule change states that the server’s partner can call the score if the server is incapable of calling the score with adequate volume for the players to hear it.  If this is the case the partner must call the score for the whole game.

Thank you to Barry Halpenny, our VP Silveridge Pickleball Club Executive team member, who put together this update for us.

Visit Pickleball Channel 411 to learn about Pickleball, broaden your knowledge and learn suggestions to develop skills:

What You Need To Know!

What equipment will I need?

When playing pickleball, each player will need a pickleball paddle, which is smaller than a tennis racquet but larger than a ping-pong paddle. Originally, paddles were made only from wood, however, today's paddles have evolved dramatically and are primarily made of lightweight composite materials, including aluminium and graphite. If you're attending an introductory clinic, we have paddles available for loan. The ball itself is unique, with holes through it like a wiffleball, and there are different balls models intended for indoor and outdoor play. The ball is usually white or yellow in colour however colour balls are also gaining in popularity.

What apparel and accessories are worn?

The Silveridge Pickleball Club enthusiastically endorses the use of eye protection while playing pickleball.

A pickleball court is the same size as a doubles badminton court and measures 20 x 44 feet. In pickleball, the same court is used for both doubles and singles play. The net is 36 inches in the middle. The court is striped similar to a tennis court with right and left service courts and a 7-foot non-volley zone in the front of the net (referred to as the "kitchen"). Courts can be constructed specifically for pickleball or they can be converted using existing tennis or badminton courts.

What type of paddle should I buy?

A Google search for "pickleball paddle type" will quickly yield many useful results.

One option is to visit Pickleball Central's Pickleball Paddle Guide.  They have created this guide to help players of all skill levels pick the best possible paddle based on their style of play, their physical attributes, and their experience level.

You can order a pickleball paddle and other equipment at “PickleballCentral.com” and use the discount code “CRSilveridge” to receive a 5% discount on your order.  In addition, any purchase you make will automatically give our club the same 5% discount in a credit. They offer the lowest price guarantee and a 30-day 100% happiest return policy. Alternately, visit a sporting store near you.

If you intend to play pickleball more than once or twice, do not purchase a wooden paddle. Quality composite paddles are available locally for well under $100. 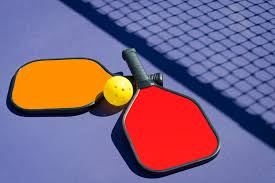 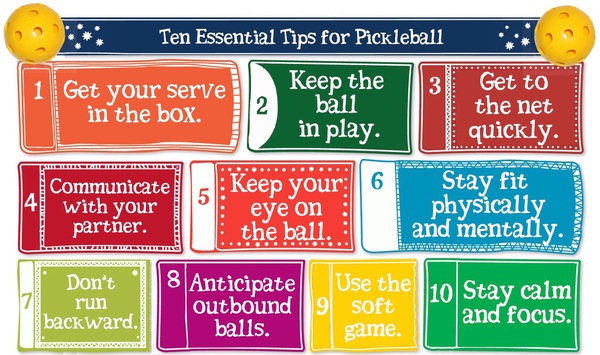 Playing when there are clear differences in level.

Everyone seems to think the best way to improve your game is to play with better players. Silveridge Pickleball Club maintains that this is not the case unless the stronger player wants to play with you. We strongly believe that four equally matched opponents will improve their game faster, as everyone will typically bring a special shot/skill to the game that will force you to focus harder and result in a highly competitive game.

The Club offers formal clinics for those wishing to improve their skill level. Everyone will take away new skills from a clinic (typically different) which will again enhance the experience of level play.

The culture of pickleball has always been very welcoming and inclusive of new players but, as you become more intent on improving your game, you DON’T normally want to play with less-experienced players. Recognizing everyone has to start somewhere:

When you want to “Play Up” with players who are STRONGER than you are:

Ask Politely and Give Them an Out. For example, “Do you all mind if I get a game in with you, or would you rather play on your own?”

Ask at the Beginning or End of the Day. Approach when they are warming up or cooling down. DON’T go when they are in the midst of a streak of higher-level play.

Accommodate Their Flow. If you do approach them in the midst of higher-level play, accommodate their flow. Ask, “Hey, do you mind if I get a game in with you all before you quit today?” so that they can continue playing, but will hopefully commit to playing with you later.

Be Conscientious. If they do play a few games with you at the beginning of the day, make it easy for them to bow out and play with other higher-level players so that they will be more likely to want to play with you again in the future. You might say, “Hey, I see you can get a good game in against those guys, I’ll sit this one out and maybe we can play again later if you have a chance.”

Hit to Them! No one likes to watch their partner hit all the balls during recreational play. The higher-level player is doing you a favour by playing with you, so hit the ball to them at least half the time. It will make you a better player, make it more fun for them, and make it more likely that they will play with you again next time.

Don’t Be Obnoxious. Remember the stronger players may not be playing at the top of their game or they may be focusing on improving their own shots, rather than on winning. Don’t assume that because you did well that you are stronger than you thought!

Show Your Appreciation. If they give you feedback on your game, have an open mind and be appreciative of them taking the time to play and help you.

Don’t Take It Personally. Some people just aren’t going to be very friendly about it. Don’t let them get to you. Remember, it’s only pickleball!

When you agree to “Play Down” with players who are WEAKER than you are:

Remember Where You Came From. Who took you under their wing when you first started playing? Chances are you’ve improved your game since then by getting to play with better players, so pay it forward and make a point to regularly play with players who are weaker than you. You could regularly play a warm-up game with them, or once a week decide to dedicate the last 30-45 minutes of your play to playing with them, it’s up to you. Just find a way to pay it forward.

If Now’s Not Good, Say When. If someone asks to play with you and you opt to play a higher-level game instead, let them know when you WOULD be willing to play, perhaps later in the day, or later in the week.

Give Them a Head’s Up On How Long You’ll Stay. When you do play, let them know in advance how long you’re planning to play, you might say, “I’d love to play with you all for a game or two, but then I’d like to get in with those other players.”

Don’t Be Patronizing — Or, Overly Aggressive. Instead of focusing on who wins or loses, find a way to make it challenging for yourself. Pick a shot you want to improve upon and focus on hitting that shot. Or, try to reduce your number of unforced errors. Focus on consistency and keeping the ball in play rather than slamming every put-away shot you get.

Limit Your Feedback. If you notice something they could be doing better, limit your feedback to one aspect of their game during play. Giving them too many pointers can overwhelm them. Plus, they’re probably already a little nervous about being on the court with you, so don’t be too critical. Afterwards, if you want to give them more background info on your pointer, or give them one additional pointer, go ahead, but start out by asking permission first, “Would you like to hear more about what I noticed about your game?”