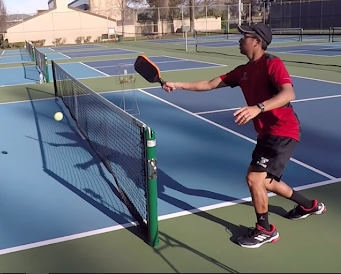 Who or what is an ERNE?

The term ERNE, (pronounced Ernie) was first coined by Jeff Shank after seeing this move made by Erne Perry at the 2010 Nationals, held in Sun City Festival, Arizona.

From a referee’s perspective, this is one of the more challenging moves to call correctly every time. As we dissect the movement leading to the shot, this will become more obvious.

The move can be initiated a couple of different ways, but most commonly the players start from a position just behind their Non-Volley Zone (NVZ) line. While dinking back and forth with a player in front of them, the one player will wait until the opponent puts their head down to play another dink just over the net. At that moment the player will jump across the corner of the NVZ with enough energy to land with both feet outside of the court, making sure not to touch the sideline with either foot. While in the air, (if the timing is correct), the player will make contact with the ball just as it comes to their side of the net, making sure to hit the ball down, sharply, or into the body of the opponent, for a winner.

Another method is to run through the NVZ, and make contact with the ball close to the net after the player has established position outside of the court. Again, timing is everything. As you can imagine from these descriptions, the referee has to be particularly alert, but even then it can still prove to be difficult. If you have done any refereeing, you probably already know that watching the NVZ is one of the referees most important jobs. The referee is responsible for calling everything that takes place in the NVZ, and shouldn’t miss a call in that area, BUT they are human and can only do so much. Referees are taught not to follow the ball, but watch the position of the players, particularly the player volleying a ball while in motion towards their NVZ.

From the above description of the Erne, the referee should be using their peripheral vision to watch the player about to play a bouncing ball, while on the other side the player is preparing to leap toward you, the referee. You must confirm that neither foot makes contact with the NVZ line prior to the jump. You might have to take a step back away from the net post, while at the same time paying attention to the approaching player and where the feet make contact with the playing surface. Watching to see if there is any contact with the net or net post, while the ball is still in play.

The other issue that referees face is the missed Erne! This often takes place when the opponent anticipates the Erne or simply changes direction and hits the ball back on the diagonal. Now the referee has to watch where the ball is heading and also the player that is moving or jumping across the NVZ. The issue here is whether that player crosses the plane of the net with any part of their body, clothing or paddle, when they don’t make contact with the ball. This is one of the main reasons that some are in favour of a two referee system.